We set our sights to the archipelagic country of Indonesia to uncover 12 young and emerging artists who are making their marks in this vibrant art scene.

Nestled within the eastern continent as the Cradle of Art is Indonesia, an archipelagic country with 17,000 to 18,000 islands lining the equator in Southeast Asia. From vivid and energetic abstract abstractions to highly sophisticated and detailed photorealistic paintings, there is an artform catering to the palate of every individual emerging from the prism of artists residing there. Art Republik skims the talent pool of the land to identify 15 Indonesian artists who are distinctive trailblazers of 2021. 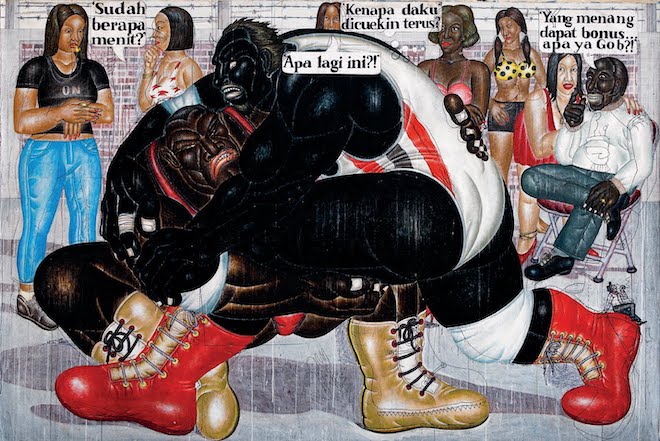 Exaggeration is the name of the game when it comes to the paintings of the 37-year-old Yogyakarta-based artist. Often clad in bulbous bodily features, Masriadi’s figures are often derivations of video games and comics. Through the deformation of his subjects, he recalibrated the perceptions of the human figure and materialised it as his iconic style. His painting, The Man From Bantul (The Final Round), was sold at US$296,800, setting a record for contemporary Southeast Asian art.

Browse his art on: https://inyomanmasriadi.com/ 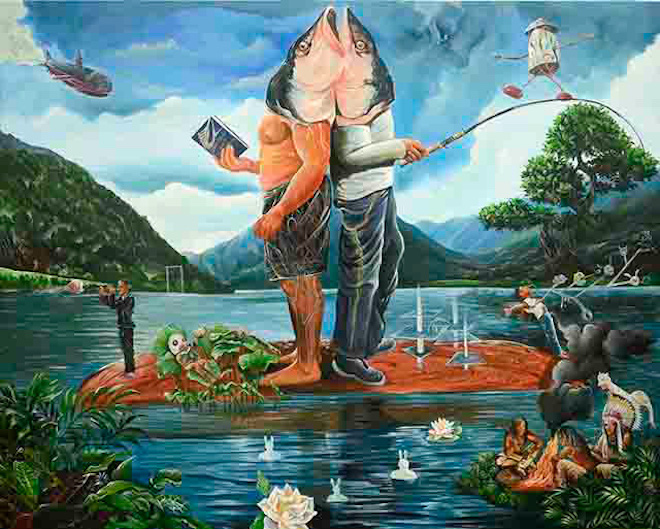 Surrealistic in a Dali-esque fashion, Lugas’ paintings and sculptures grasp at the viewers’ attention almost instantly once eyes are set upon his works. Pop culture and folklore references poke out from various sections of his paintings, prompting his audiences to draw parallels and reignite memories and experiences of days gone by. In essence, Lugas’ works address the ironies and contradictions in modern society, thus reopening up conversations that would often be pegged as the elephant in the room. 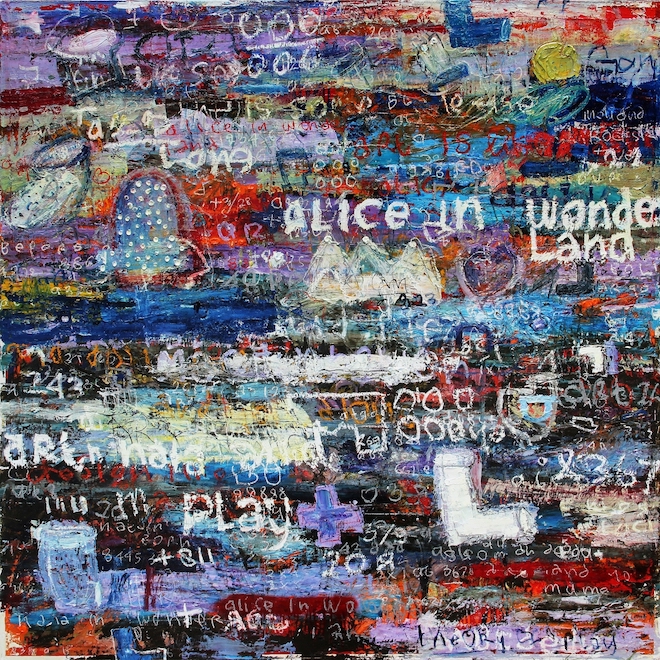 Post-Suharto art in Indonesia were often approached with realism, and it was an oversaturation of it that Dedy Sufriadi needed to find an outlet to paint his academic interest in Existentialism. Atop robust colours applied upon sizeable canvases are often scrawls of texts or evocative imageries characteristic of the Expressionism style, and it was in this style that Dedy opted to demonstrate the raw power of his artistic approach. Through this, he questions and re-presents the idea of life amidst the absurdities of living it out.

Browse his art on: @dedysufriadi 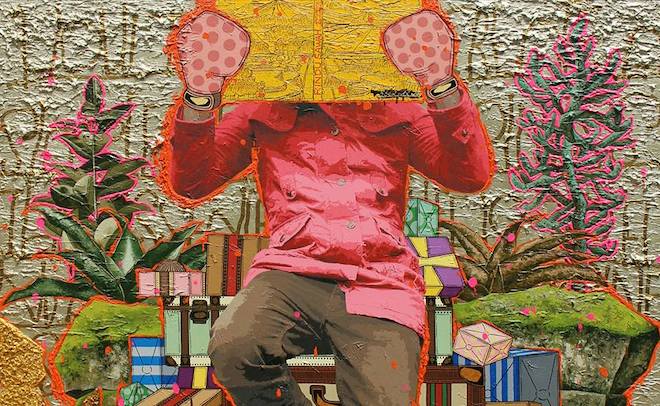 Collage-like but not, 34-year-old Justian Jafin’s pieces are layered with commentaries on present-day societal issues. Working with acrylics, his style of painting involves creating overlapping layers that cover and uncover the variety of subjects in the piece. This way, viewers will need to observe intently as a story unfolds before their eyes, bringing their focus to their roles in contributing to society and hopefully empower them to bring about change.

Browse his art on: @justianjafinw 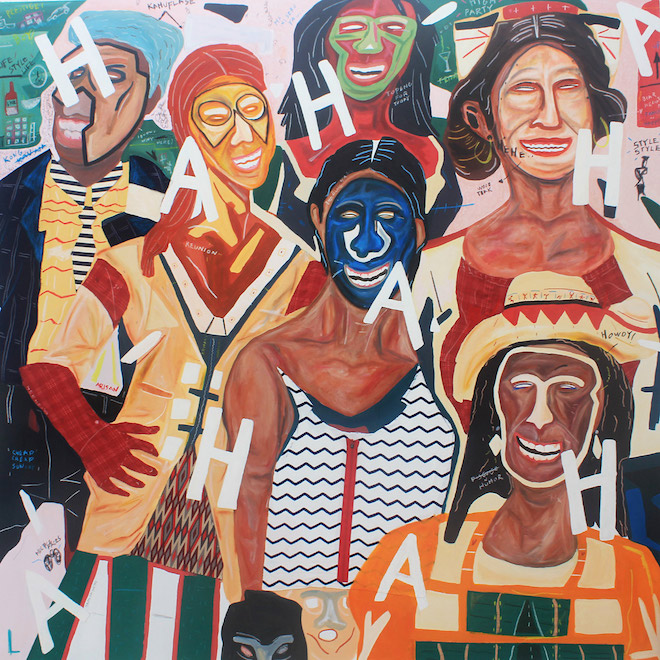 Laughter is the immediate byproduct of joy, but Naufal attempts to dissect the layers of the act in his works. In direct relation to his daily life, Naufal draws attention to usually mundane acts and bring them to attention. His interest in questioning the human condition further adds the depth in the conceptual aspects of his art, which complements with and contrasts against the whimsical imageries in the works.

Browse his art on: @naufalabshar 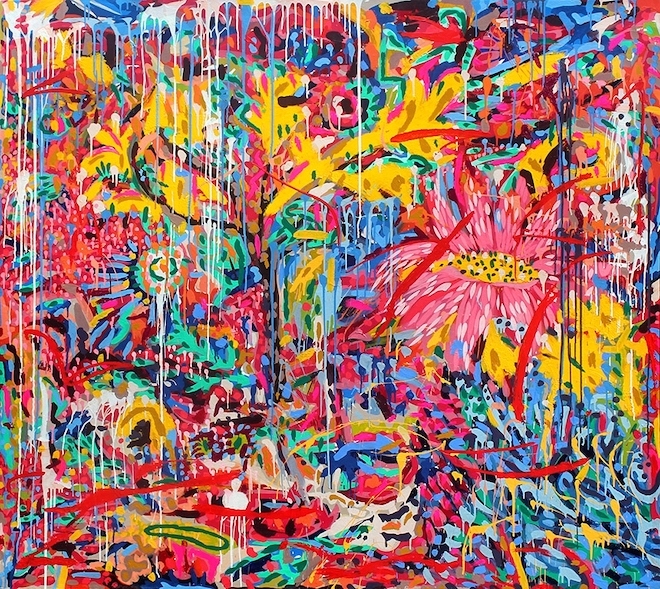 Intricately vibrant and chaotically controlled, Anton’s paintings are masses of clashes that spell out his Madurese background in which bold and vibratory colours are very much celebrated by his people. Perhaps the nuances may point to the works of batik paintings, but Anton reveals that that is mostly attributed to his employment of lines that were set to emphasise his shapes and forms in the paintings. Often moved by situations like human conflicts, love, balance, and cultural identity, Anton desires his artistic process to be as intuitive as it is spontaneous. His paintings are, in all, the embodiments of energy, enthusiasm, emotions, contradictions, and curiosity.

Browse his art on: @afganial_ 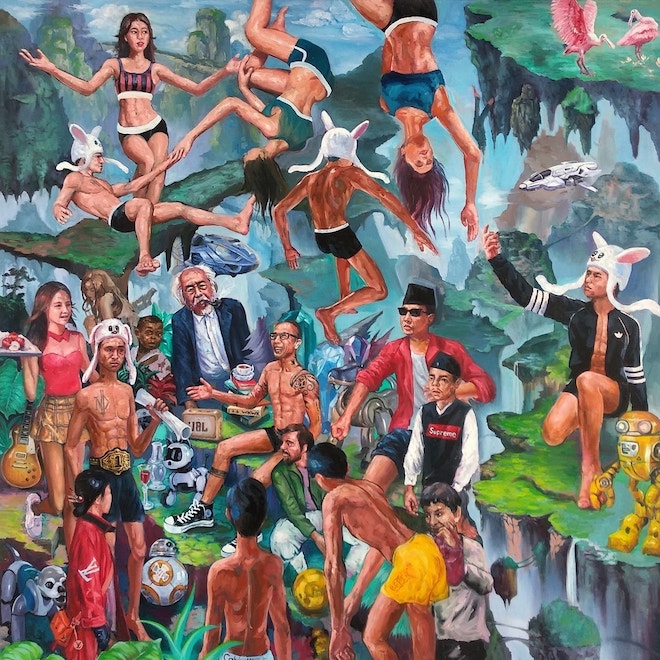 The classical Batuan-style artworks originating from South Bali are often dense, dynamic, and detailed projections of legendary scenes or themes from daily lives. Agus adopts this feature within his modern-day rendition of the style to reinterpret traditions through his own lens. His compact landscape of elements that correspond and interact with one another creates a blend of narratives that unfold in different ways for every audience that stands before his art, ultimately making the story-telling process unique to each individual.

Browse his art on: @im.agusaputra 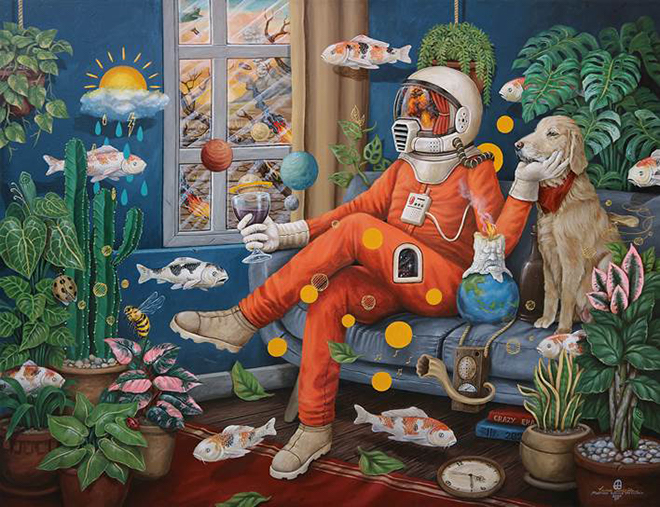 In the eyes of Iwan Suastika, the concept is simple: I am the universe, You are the universe, and We are the universe. Iwan’s visual narratives are surrealistic scenes of humanoid beasts and pop culture references which are heavily imbued with symbols and metaphors. Each piece generates a conversation between the artist and his work, which is later conveyed to his viewers as cryptic messages to be deciphered. This is probably why Iwan stands out as an artistic enigmatologist who shows no end to the creation of his visual puzzles and storytelling prowess.

Browse his art on: @iwansuastika 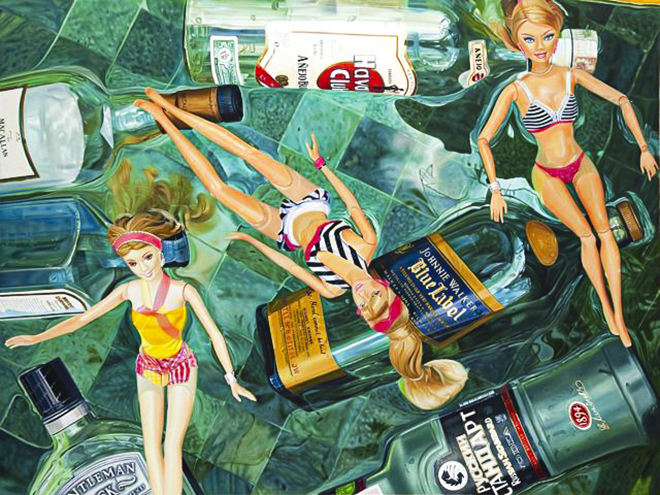 The conversation often goes like this, “No, they are not photos; yes, they are painted.” A doubletake is often required when glancing in the direction of Dodit’s artworks. Hyperrealistically rendered, Dodit’s Bikini-clad Barbie Dolls and alcohol bottles are direct criticisms of the consumer capitalism problem proliferating on the island of Bali where he resides. The lack of control on alcohol consumption further becomes a question of ethics when underaged teenagers have unimpeded access to purchase alcohols in stores, and he intends, through his art, to lift the carpet off this issue that has plagued the locals for decades now.

Browse his art on: @doditartawan 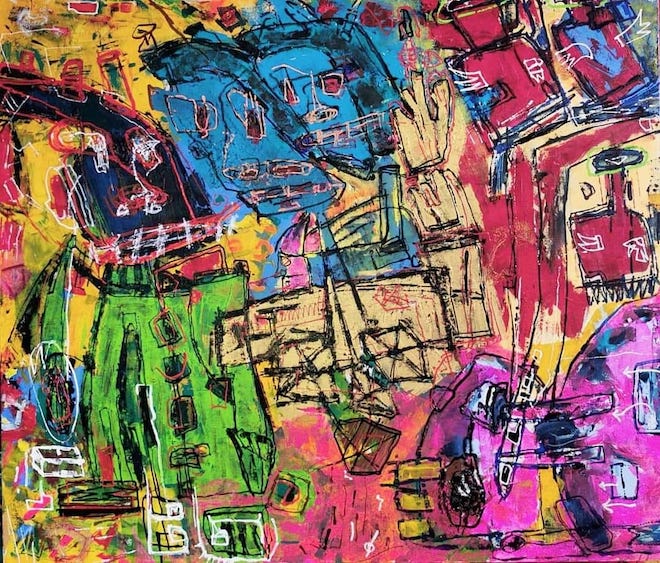 One of the most organically-inclined artists is Nana Tedja, one of Indonesia’s leading female artist who shows no fear in expressing herself within the male-dominated art scene. Bold, expressive, and unapologetically wild, Nana’s artistic approach breaks down the demarcations between herself and her art. True to herself in every sense, she has always intended her art to be an immediate reflection of her character and personality. Abstract expressionism may the style she has gone for, but Nana has reassuringly stated that the sole reason for her painting method was simply based off her preference and mood, and nothing more.

Browse her art on: @nana_tedja 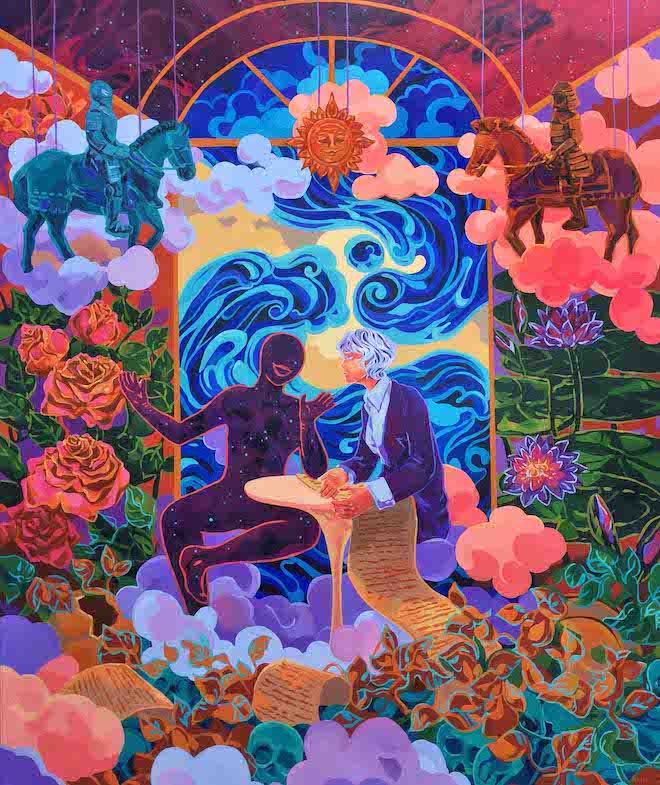 Aurora’s works, with their flat colours and thick outlines, started out as a hobby, then a cry for help, and later a call for discussion. She used art as a vessel to deliver ideas that would effect action from people as she probes and pokes at issues within the socio-economic dynamic in society. These topics are generally difficult to bring up without adding fuel to the flame, but Aurora believes that art, regardless of medium, is the perfect instrument to initiate conversations on the subjects, especially those on humanity as a whole. Most issues addressed within Aurora’s art are inspired by real-life interactions with people who either act as the perpetrator in said issues, fall victim to them, or are fighting their hardest to eliminate them.

Browse her art on: @aurora_santika 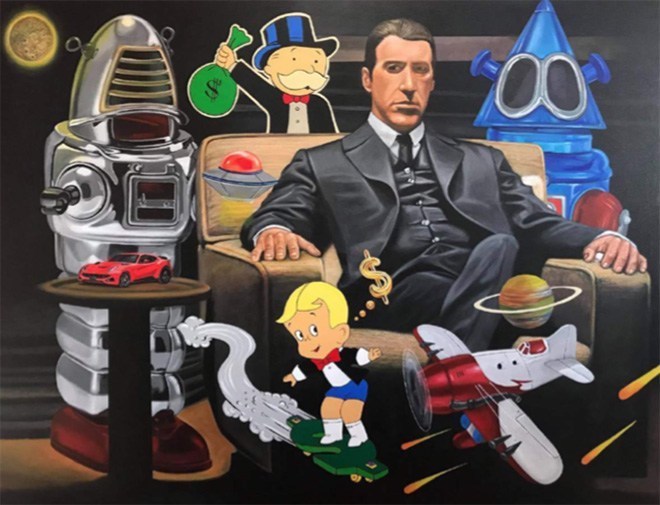 Part of the young artist generation whose works are heavily influenced by comics, cartoons, illustrations, and pop culture, Petek Sutrisno deliberately incorporates his daily life into each piece of work to portray intended and relatable messages for which his audiences would be able to resonate with easily. Most of his work are visual translations of his childhood experience and current political issues. Flowers are a common sight in Petek’s paintings, and the artist explains that they relate to the elements of love, beauty, and peace, which he religiously incorporates into all of his art. In relevance to current affair, natural elements became a staple in his pieces as a reminder to all that environmental issues are still unresolved and it is everyone’s duty to preserve and not further damage nature and the environment.

Browse his art on: @peteksutrisno

Art thrives best in a land where the expression of creativity is unimpeded; as Indonesia entered its post-Suharto era, such the place it became where artistic thoughts, ideas and concepts are constantly taking shape and reshaping themselves in accordance with the shifting sands of modern political perspectives and evolution of traditions held firm.

Written By Ryan Mario and republished by permission of luxuo